Dust off your dark denim, folks, because this season brings the revival of our trustiest fabric in shades, shapes, and stitching straight from the 2000s. Designers ushered in spring ’18’s denim redux with an assembly of indigo washes, exposed stitching, and sharp cuts, signaling the end of grungy jackets and jeans, and the beginning of smart, tailored, utilitarian pieces. Denim, while a constant in our wardrobes, is subject to the ebb and flow of industry trends. For several seasons now, the cropped kick-flare has reigned supreme, and with good reason: Perfectly paired with an ankle boot — more specifically, the foot- hugging sock boot — or a pair of Birkenstocks in the summer, the style is both flattering and versatile. Its popularity rode the wave of the backlash against the skinny jean, and it came in every color of the rainbow, from red and white to pastel hues. But with spring ’18 came a more refined slew of denim, and an aesthetic you may recognize. The noughties was a glorious decade,

when pop stars fell out of clubs with little thought for PR and an excessive tan and stripy highlights were the epitome of beauty. But it was also an era where style lines were most definitely blurred — with denim one of the biggest culprits. Red carpet style may now mean glamour and glitz but back then, it meant Britney and Justin in matching denim get-ups. It was a time when music groups wore Canadian tuxedos and brands like Tommy Hilfiger (which celebrated its 20th anniversary in 2005) were enjoying popularity, thus trickling down to us mere mortals, who in turn wore denim at every occasion. So how have designers reimagined the decade’s denim for the contemporary woman? First things first: denim’s gone dark. Indigo swept catwalks across the board, from Zadig & Voltaire, Adam Selman, and Max Mara to Calvin Klein and Tibi. “Denim always appeals to designers as it has the structure to hold a shape, and is inherently cool,” “Dark, indigo denim is the natural way to work with the fabric, as opposed to artificially adding in patterns.” To keep it contemporary, the trick to making this noughties denim redux right for 2018 is with sharp cuts and clever details. “Keep it clean and in classic

shapes, with an exaggerated detail,”. “Find a jacket with extended collar points, a straight leg with flowing ruffles, or a jumpsuit with a nipped-in waist to feel modern and crisp.” A throwback to the noughties with a modern-day refresh? This is denim we can get on board with. 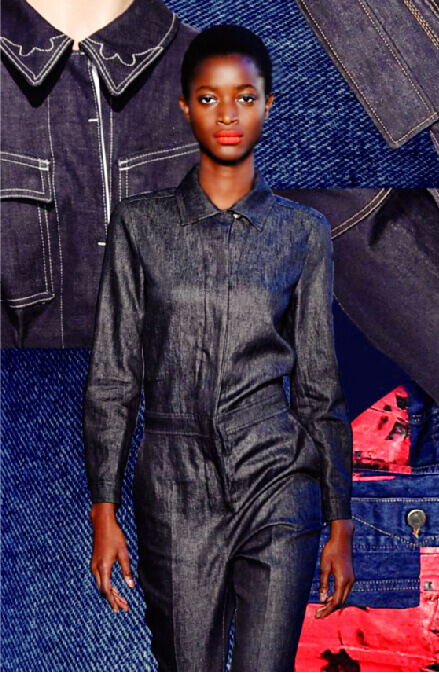 ACROSS APPAREL IN LONG JOURNEY

ACROSS APPAREL IN LONG JOURNEY