Vetements has done it again. Today, the ever-subversive brand debuted a brand new collaboration with Levi’s. Available now on MyTheresa.com, the collection includes an array cool, high-rise distressed jeans and relaxed jackets, and is the latest in a number of collabs with other major brands, including Reebok, Manolo Blahnik, Comme des Garcons, and Juicy Couture. Clicking through the e-commerce site, you’d be inclined to glance over the offerings as another high-end denim collection. Thankfully, there’s Instagram to prove otherwise.

In a shot uploaded by Vetements promoting the collection, the brand points out a zipper detailing that extends beyond the normal fly to wrap all around the crotch. And don’t worry—it’s fully functional, as evidenced by the exposed butt cheek in the image. 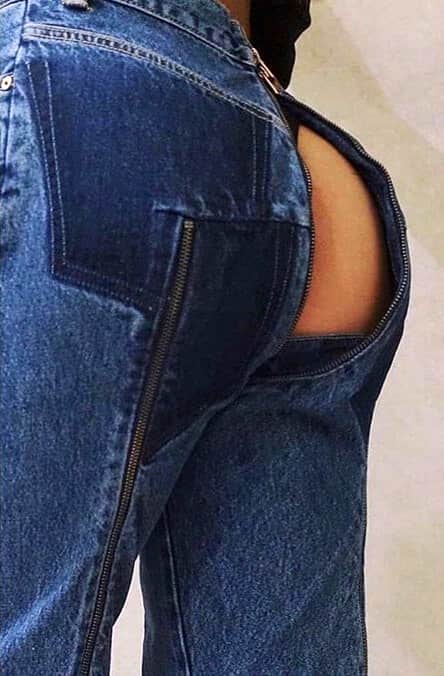 While it may be the denim scandal du jour, the brand is hardly the first to delve into the realm of risqué. Here, a look back at some of the most scandalous designer jeans.

While not quite designer, per se, it would be remiss to talk about butt-exposing jeans without mentioning Rag City Blues. The popular ’80s brand made zip-around jeans the thing to wear—and an expression of creativity at that; each leg was fully removable, allowing you to mix and match pant legs. Unfortunately, the company is no longer around.

Around the same time, Calvin Klein launched its denim line, widely heralded as the first designer denim. To promote the collection, Klein tapped 15-year-old model Brooke Shields, who famously cooed to photographer Richard Avedon’s lens, “You want to know what comes between me and my Calvins? Nothing.” The ads were soon pulled from both ABC and NBC in New York. Klein, in response, declared, “Jeans are sex.The tighter they are, the better they sell.”

Basically Every Brand in the 2000s

Speaking of low-rise—By the early Aughts, low-slung jeans were a full-on craze, thanks to the likes of Britney Spears and Christina Aguilera, and designers kept up with the demand by presenting lower and lower versions (a movement lead by the Italians, including Dolce & Gabbana and Dsquared²). The controversy here? How low can you go, and will it corrupt the youth of America?

Like Calvin Klein before him, Wang’s scandal comes not from the product itself, but rather the advertising around it. The designer enlisted pal and Wang Squad member Anna Ewers as the face of the collection—and body, too. The campaign depicted Ewers lounging naked in a leather recliner, her designer jeans pulled down around her ankles. And if you weren’t clear on the collection name? “Denim X Alexander Wang” was positioned across her chest. Subtle.

BGMEA President called on US buyers to reduce audits

BGMEA members participate in Texworld to explore opportunities in US market